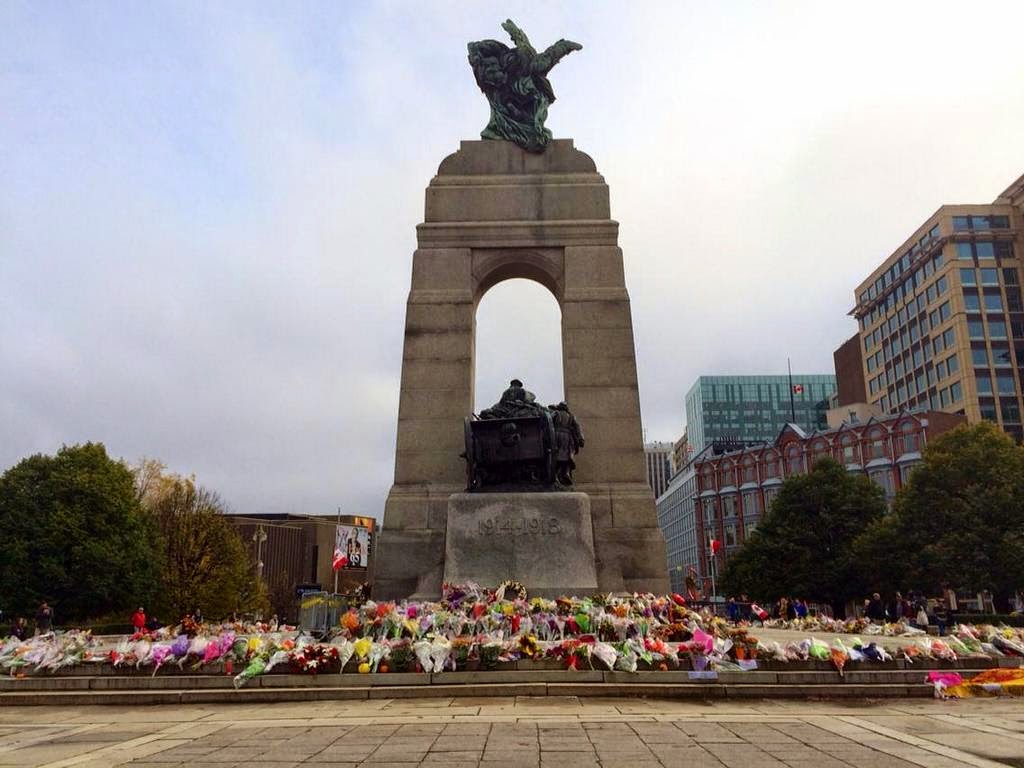 In case you missed it, the past several days have seen a huge chunk of the news cycle occupied with the death of one reservist, Cpl Nathan Cirillo, who was unfortunate enough to have been on duty guarding the cenotaph on Wednesday morning. This coverage has risen to a fever-pitch over the past two days. A good chunk of on-air time yesterday was spent watching his hearse travel from Ottawa to his home town of Hamilton, and then interviewing people coming out of the public viewing. Today the CBC covered his funeral procession and funeral - live.  The funeral is over now, but the worship is not. Coming up, they are going to talk to people who knew him, and some who didn't, and find out what they remember most about him.

Mountains of flowers and teddy bears and stuff has been piled at the war memorial, and also around the front gate of his home in Hamilton. We have been treated to heart-wrenching shots of his dogs peering under the fence with captions like, "Their master will never come home" and "His faithful dogs still wait for him."

Thousands of people lined the overpasses on what has been renamed the Highway of Heroes, one of many similarly named roads across Canada used to transport caskets from Afghanistan to an army base.

Let's grab some perspective, can we?

In World War 1 and World War 2, families got telegrams to notify them of deaths overseas. They cried, of course, in their homes. Some went to church and cried there, or over to the neighbours'... Huge outpourings of grief, weeping loudly and hysterically in public were generally frowned upon. Such outbursts lacked dignity, and even disrespected the courage of the soldiers they had lost. They would have been shocked and confused by what we have witnessed in Canada in the past few days.

Times have changed, certainly. Caskets bearing troops home from Afghanistan arrived at an airbase and were transported, via a ramp ceremony with honour guard, to their home base or a funeral home of the family's choosing. The public was invited to come to the overpasses on whichever "Highway of Heroes" the hearse would travel. But it was quite low-key. It had been the practice to fly the flag at half-mast on federal buildings. when the fallen were returned from Afghanistan. However, according to this entry from Wikipedia, "A controversy surfaced in April, 2006, when the newly appointed Conservative government discontinued the practice, initiated by the previous Liberal government following the Tarnak Farm incident,[6] of flying the flag at half-mast on all government buildings whenever a Canadian soldier was killed in action in Afghanistan. The issue divided veterans' groups and military families, some of whom supported the return to the original tradition of using Remembrance Day to honour all soldiers killed in action, while others felt it was an appropriate way to honour the fallen and to remind the population of the costs of war. In spite of the federal government's policy, local authorities have often decided to fly the flag at half-mast to honour fallen soldiers who were from their jurisdiction, including Toronto and Saskatchewan."

But, in this case Harper has ordered the flags across the country to remain at half-mast until further notice.

Let's recap. 24 year old Cpl Cirillo was a reservist in Hamilton. He loved dogs and had a 5 year old son. He had always wanted to be in the military. He was assigned to guard the cenotaph in Ottawa last week. Apparently it is a duty that gets passed from regiment to regiment. The main responsibilities of this symbolic guard are to let tourists take pictures with them and keep drunk people from peeing on the war memorial. Last Wednesday morning, a 32 year-old homeless man with a drug problem and possible mental illness shot Cirillo before running into the Parliament Building where he would die in a hail of gunfire. Since then the rhetoric about Cirillo's heroism and courage has been unending. His death was tragic. He was in the wrong place at the wrong time. But he was just standing there, doing his job, when he was shot. He didn't rush across a battlefield under heavy enemy fire to drag a fallen comrade to safety. He did not dive into an icy river to rescue a child who had fallen from a bridge. What, exactly, makes him heroic? Doesn't it cheapen the meaning of the word to use it so gratuitously? What, for that matter, makes him courageous? He may have been brave, in general, but there was no moment of bravery in this instance. He was likely surprised, shocked, distressed when he was shot. But if you throw the word into a sentence describing the actual incident, you get something like, "He lay on the pavement, courageously bleeding..." It makes no sense. Tragic. Yes, it was tragic. A little boy has lost his dad, parents have lost a son, siblings have lost a brother... But it is always tragic when someone dies so young, or so unexpectedly.

So what is the meaning of this spectacle we have been witnessing here?

Harper and the media are playing us here, like the strings on a harp. Never before has Canada so worshiped the military as it has in recent years, since Harper came to power. While at the same time, cutting funding and services for wounded veterans, cutting resources for the Department of National Defence, bungling acquisition of infrastructure and equipment... Harper likes the "concept" of the military. There are so many opportunities to dress up like soldiers, so many cool photo ops with big tough looking weapons... And Canada has always honoured our military. So Harper is endeavouring to inextricably connect himself with the notion of the military in Canadians' minds. So that we will vote for him.

There is no doubt he is reshaping this country. He hardly ever appears now without being flanked by countless huge flags. He likes to get his picture taken in military-esque situations, laying a wreath at the cenotaph, or, at a soldier's funeral... 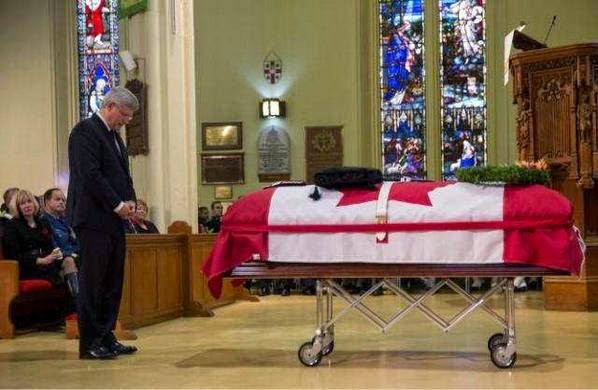 He keeps repeating that the attack on Wednesday as an act of terror. A brutal attack on the essence of our country. Drum up fear, drive people into an emotional frenzy, glorify the military... See a pattern here? Make us scared, uncertain, looking for protection. Make us emotional so we can't think straight. Make the military into some sort of sacred nobility. Then pass laws to give themselves all kinds of powers to keep an eye on any critics, you know, to protect us...

I am frankly disgusted by the blatant attempt to manipulate the minds of Canadians. If you have watched Russell Brand's deconstruction of Harper's post-Ottawa shooting speech, try to follow his example and think critically about what you are really hearing in all of Harper's speeches. It will open your eyes and free you from the mind-control.

Russell Brand's video:
https://www.youtube.com/watch?v=ALEaAAU3KAE
Yes, he is annoying, but he nails it here...

Posted by The Cailleach: Another Blogging Ginger at 15:12 No comments: