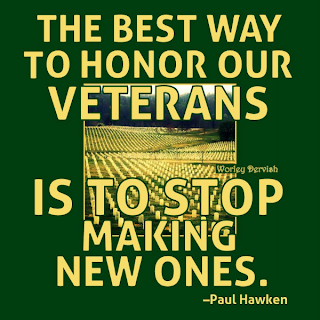 As a child, Remembrance Day ceremonies were a strange thing. My Dad was a WWII vet who seldom talked about his service overseas, except for tales of things he did on leave in the UK. We had relatives he visited, and I have a little cat statue he bought in a curiousity shop in London during the blitz. We never went to the public Remembrance Day ceremonies, he never went to reunions or to the legion. He always called these things "a bunch of old guys who want to relive their so-called glory days". But on November 11, at 11 am, whatever we were doing, everything stopped. I recall practicing piano with him sitting beside me as he often did, and he suddenly put his hands over mine to stop me playing. I looked up at him, wondering what was wrong. His eyes were closed and there was a tear on his cheek. I was only maybe 7 years old and felt very confused. After a few moments, he opened his eyes, brushed the moisture from his face and simply said, "Just remembering". And we went on with the piano practice.

(There is no doubt in my mind, looking back, that my Dad was profoundly affected by his experiences. Not just by the pins in his hip or his inner ear damage that affected his balance, but also in his mind. When he was dying and all doped up on painkillers, he was convinced he had crashed behind enemy lines. The nursing home had to put an ankle bracelet on him because he was intent on escaping and getting home. I had many odd conversations with him during that time that made it clear he felt we were both prisoners of war, and the nurses and staff were German soldiers. That was a very hard time, because he was so very anxious and distressed. It was almost a blessing when his illness progressed to where he was beyond those almost lucid kinds of thoughts.)

Years went by... I got a clearer idea of what Remembrance Day was. A recalling of the lives lost fighting an evil in Europe. The young men and women who died fighting to stop Hitler from spreading his tyranny and oppression across the world. The young men and women who died in a far less clear-cut war 20 years before that: The War to End All Wars. That war, the First World War, was supposed to be a final victory for peace. And since then, war has been raging in one form or another around the world.

Certain things about the big Remembrance Day ceremony in Ottawa have always bothered me. I have always felt a profound grief for the Silver Cross Mother. Each year a woman who has lost her child in war is selected to represent all bereaved mothers. It is supposed to be an honour. It is hard to imagine anything more terrible than to bury your children. I feel both sympathy and rage for the Silver Cross Mother. She is selected to bear an honour that probably very few turn down. But she is brought out as a symbol - she is meant to demonstrate to the country that we should be willing to sacrifice our children like this good woman. And that fills me with rage. It is not our children's blood that will make the world peaceful. It is the ability of world leaders to commit to diplomacy and overcome their greed and ideology, to resolve to not go to war.

My Dad used to say, "It's old men that start wars. They should be the ones that have to go and fight them."

War has become an economic proposition. The US and, more recently, Canada, and other countries, have a huge investment in companies whose sole business it is to make weapons of war. Bombs and ammunition have a shelf life. The military industrial complex has a vested interest in keeping wars starting and continuing. Creating a market, if you will. And then there are issues like oil, and land. Some predict fresh water will be the next strategic golden egg that countries will go to war for. Our children are not commodities, or military "assets", to be thrown out as cannon fodder to further a political or commercial agenda.

Seldom has Canada seen a government as militaristic as the Harper regime. I can't think of one in my lifetime. "Honour the troops" days are becoming a frequent part of our sporting events. Endless commemorations of historic battles suck up millions of tax dollars. The War of 1812? Really? Canada wasn't even a country for another 55 years. Revamping our museums to showcase Canada's military history (while downplaying peacekeeping in favour of active combat), creating a huge monument to "the victims of communism", the CBC and other networks spending the week or more leading up to Remembrance Day wallowing in old footage and tape from WWI and WWII, the government engaging in fiery rhetoric in the House and in press conferences - fear-mongering, trying to instill a militaristic patriotism... The worst offender in the media must be the Sun Network, which is now offering these shirts... 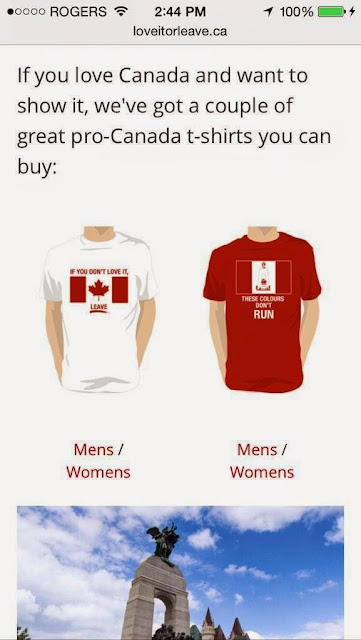 And the most recent undignified emotional orgies over the two servicemen killed in separate incidents on Canadian soil a few weeks ago... We live in a world where our brains have been softened by the endless barrage of Jerry Springers and Oprahs and reality TV... A world where people feel the need to writhe and wail and beat their chests, without looking at the facts and examining the evidence. Both those men were killed by lone assailants. Men who had fallen through the cracks, become disengaged in society, suffered from untreated mental illness, one was a homeless addict. Yet the government was declaring both as terrorist attacks before any information had emerged. They are sticking to the story, too, because it so nicely fits their narrative and lends fuel to the fire of militaristic patriotism they are trying so hard to build.

Harper grabbed a big photo op at the funeral of one of the soldiers. 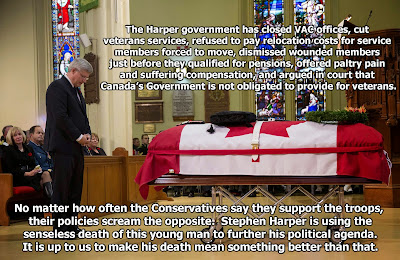 And all of this against the backdrop of our government fighting veterans' groups in court, seeking benefits and care for battlefield injuries. Harper and co. deny that our country has a sacred trust to those who risk life and limb and mental health at the whim of the government. They cut veterans loose just shy of being eligible for their pensions because they have service-related injuries. They offer lump-sum pay-outs to people who have lifetime injuries. These are young people coming home missing limbs, missing eyes, organs, with psychological injuries. They have years, 50 years, 60 years, or more, to live with these injuries and the government wants to pay them off and send them away. Veterans are killing themselves because they are not receiving the treatment they need. That just isn't right.

This Remembrance Day, we should remember that.

*******
Sorry this has rambled a bit. But for a very in-depth but readable account of the Harper government's relationship with the military and veterans, please read: Delay, Deny and Die: The Harper Government and Veterans

Or maybe just this:   Gananoque
Three weeks ago, hidden amid the national outpouring of support and grief for Canada’s soldiers Cpl. Nathan Cirillo and Warrant Officer Patrice Vincent, Canada lost another soldier, Johnny Duffney.
Johnny was my friend. He died in relative obscurity, at the age of 49, in his home above a store on Gananoque’s main street, two doors down from the Royal Canadian Legion and across the street from the cenotaph in our town park. Although he had a loving partner and a circle of friends Johnny died alone by his own hand, a victim of the mental illness that ravages many of our returning soldiers. http://m.thestar.com/…

The treatment of our veterans by this government, and the glee with which they send more young men and women into harm's way, is a national crisis, a national tragedy and a national shame! 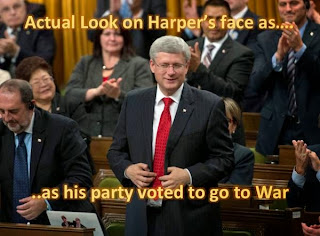 Posted by The Cailleach: Another Blogging Ginger at 17:55 No comments: