Note: This is the first in a series exploring how Stephen Harper and the CPC manipulate or outright ignore facts and scientific evidence in their policy approach. 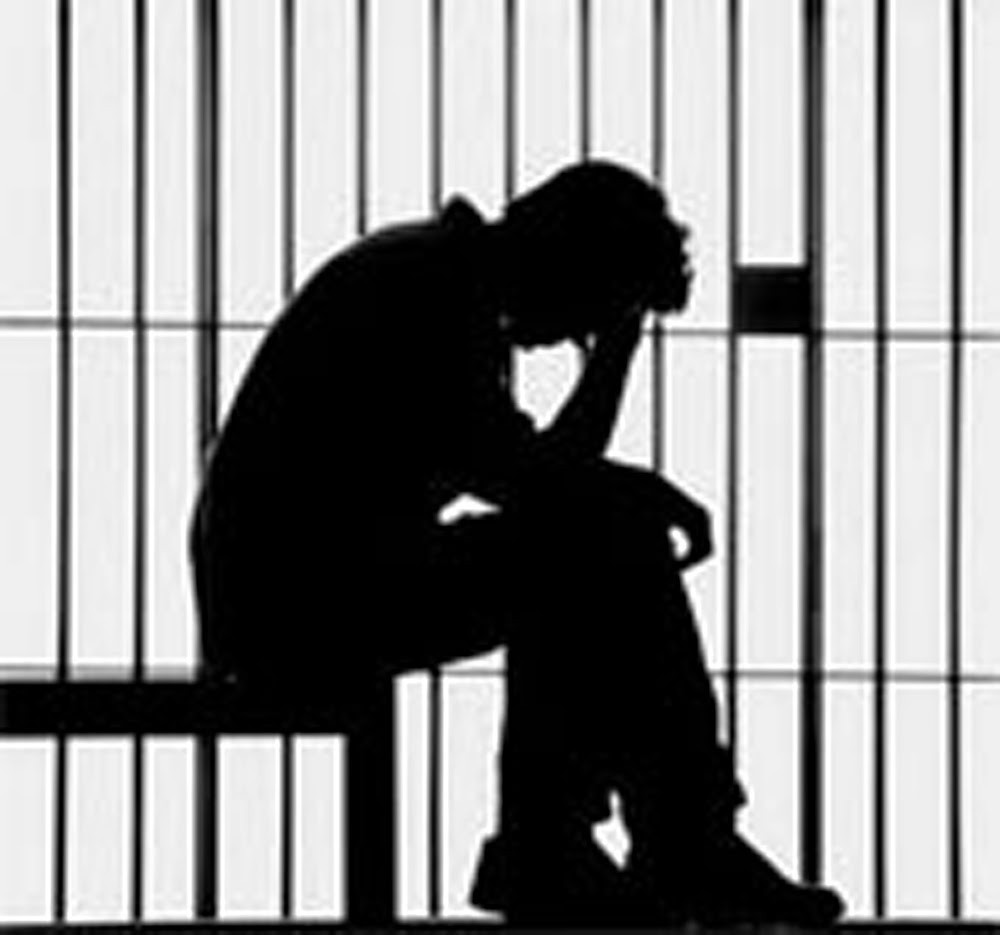 Despite the rates of all sort of crime going down in Canada, the Harper Government, in their great wisdom, have decided we need more prisons. Now, I realize this make no intuitive sense. If crime is going down, surely we may be looking at fewer prisons, right? Not so, said Stockwell Day. No, he said, we need more and bigger prisons because of an alarming increase in unreported crime.


Unreported crime... Next they'll be saying we need more animal control officers to round up all the unreported unicorns.

According to the CBC, "Statistics Canada says the country's homicide rate fell last year to 1.44 victims for every 100,000 people, its lowest level since 1966." 1966! The lowest homicide rate in 48 years! But we still need more and bigger prisons. This is because Canada's prison population is at an all-time high. Let's get our minds around this now... The crime rate is falling steadily, and we are putting more people in prison? Is the crime rate falling because most of the criminals are now in jail? That might be a simple way to look at it. But, as with many things, the simple answer is not the correct one.

The Canadian population, as a whole, is getting older. We're just not getting into mischief like we used to. So, why so many people in prison?

Let's look at the Harper Government's stance on justice and prisons. Harper is really, REALLY into punishment. He has no time or patience for ideas like prevention, harm reduction, rehabilitation.. His world is black and white - there are those who are good and do what they are told, and there are the others who are clearly morally inferior and need to be punished. And grinding other people down does give some people a sort of ego-boost, it makes them feel powerful and in control.

So, Harper has decided to follow the Bush-era US model of "justice".  The United States accounts for a mere 4.43% of the world's total population. Yet they also have a full 25% of the world's incarcerated population. One in 39 Americans is now either behind bars, on parole, or on probation. If you believe that being "tough on crime" and locking people up for longer and longer makes the streets safer, then by this reasoning, downtown areas of American cities should be about the safest places on earth, right? Are they? No. They are not. In fact, they are becoming increasingly dangerous places.

Private prisons became a thing in the US, with some prison corporations gaining the contractual right to sue a state if the population of inmates was not maintained. This article explains how that works. More laws, longer and stiffer penalties help to keep prison populations up to the required 80%-100% occupancy. What does this mean for people?

When a person is arrested and charged, the state is highly motivated to convict them and make sure they receive the longest prison time possible. If you are poor and can't afford a lawyer, you are pretty much sure to be convicted, regardless of your innocence. If you are a person of colour, your chances of being found guilty are substantially increased as well.

For-profit prisons follow the business model of reducing costs to increase profit. This means the insides of prisons are generally bleak, over-crowded and highly regulated. Food is sufficient to sustain life. Education, rehabilitation and mental health programs are expensive, and so are minimized or eliminated. Staff is kept at a bare minimum, which results in a lot of time in "lock-down" where prisoners are confined to their cells because they are more manageable that way. Apart from being dismal, depressing and depersonalizing, prisons can often be highly dangerous. Despite the danger of the situation, suicide is the leading cause of death in prison in many states in the US.

Eventually, if you survive, they have to let you out. What then? You have served your time. Do you get to start over? Not so fast. Most employers will not hire ex-cons. In the US, if you are convicted of a felony (and the meaning of the term felony varies from state to state and can result in sentences ranging from 5 days to death), you are no longer able to vote, ever. So, you can't get a job, you can't vote. You become marginalized. Some do find work with benevolent employers, but many wind up on the streets. Their underlying issues that got them into trouble in the first place have not been addressed, and now they are even more disadvantaged than before. Does this sound like a way to reduce crime?

"Even if the rate of crime were trending upward, building more prisons would not suppress the crime rate, said Craig Jones, executive director of the John Howard Society of Canada.


“To suppress the rate of crime, you have to frontload your welfare system so all your children have adequate nutrition, they live in non-violent, non-traumatizing environments — because that’s where your violence originates,” Jones said." in an article in the Toronto Star.

So, the US has begun to roll back its "tough on crime" policies. They are recognizing they DO NOT WORK to either reduce crime, or to make communities safer or society better. Texas, for goodness sake, is changing its justice system, because "tough on crime" doesn't work.

"(Chuck) DeVore (a former California Republican Assembly member and conservative candidate for the U.S. Senate) testified that Texas is closing prisons, reducing its prison population and saving millions of taxpayer dollars - and its crime rate is going down.
How is this happening? Texas is investing in alternatives to incarceration that are proving to be cheaper and more effective at keeping people out of prison. It is also doing a better job of rehabilitating people to keep them from reoffending and ending up back in prison.
Texas uses risk-assessment and better probation procedures to divert large numbers of nonviolent offenders away from the prison system, keeping them away from hard-core criminals. It requires strict implementation of victim-restitution measures, while offering alternatives to prison such as civil sanctions, drug courts and drug-abuse and mental health treatment. It also offers rehabilitation programs like job training for those in prison to prepare them to re-enter society. And Texas has invested heavily in reducing the caseloads of parole and probation officers so the state can keep better track of the people it supervises and help them move in a new direction.
It's paying off. Texas has closed three state prisons, and almost two-thirds of Texas parolees are employed." See the full article here.

Other countries have long employed more successful models of justice and rehabilitation. Norway and Sweden are striking examples. In Norway, the recidivism rate is below 20%. Compare that with over 50% in much of Europe and the US. How do they do that?

They treat prisoners with respect and work to address the problems that resulted in their crimes. They have the philosophy (which, incidentally is also in place in Canadian law) that prison is supposed to be seen as a last resort and should be used as little as possible for the shortest time necessary. In light of this, mandatory minimums in Canada may well be in contravention of our Criminal Code unless Harper has stricken this underlying concept from the books in one of the many omnibus bills. As well,  they operate on the principle that prisoners continue to have human rights and are sent to prison as punishment, not for punishment. In other words, the loss of freedom is the punishment. Loss of freedom, not loss of human dignity, not threats to personal security, not being subjected to abuse, not brutality, poor living conditions, poor food... Loss of freedom. Period. Please see related articles here,  here, and here. There is also a heavy emphasis on alternatives to jail: fines, community service, etc. that keep a lot of people out of jail in the first place. Backed up with social supports such as educational programs, drug addiction rehabilitation, mental health care and so on, Scandinavian countries keep their incarcerated population percentage at a scant fraction of that in the US.

Apart from the glee some feel in inflicting revenge on others, there is little good to be served by producing a prison system based on misery and suffering. This study, produced by the Pell Centre for International Relations and Public Policy, examines the benefits of a Nordic model of justice. In comparing the Scandinavian and American systems, the authors point out the extreme costs to a society, both in the actual cost of maintaining prisoners and also in the costs of broken families, future re-offenses, and a population that emerges from the corrections system in worse shape than when it went in, as is generally the case in a punitive-style system. 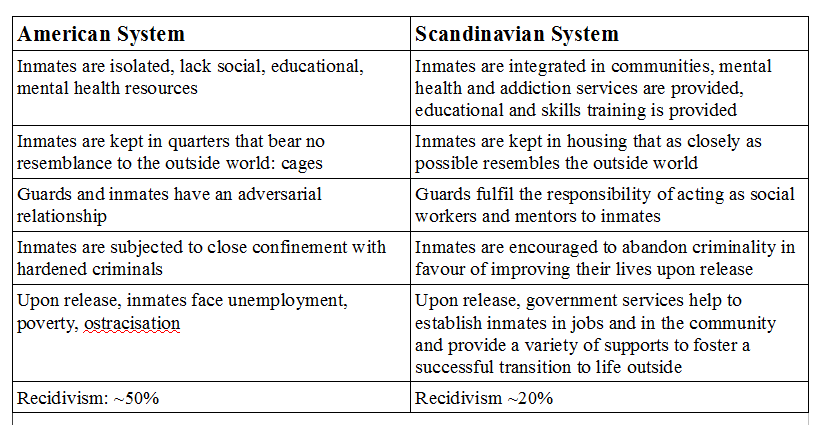 There are so many studies that demonstrate empirically that this Scandinavian humanist model is far superior to the US-style punitive model... Even the US has begun to dismantle its more extreme laws and practices. It costs far less and results in lower re-offence, lower crime rates, lower damage to society as a whole...  And yet, Harper is dead set on furthering his strategy of costly punitive "tough on crime" legislation.

The CPC introduced Bill C-10, whimsically named the "Safe Streets and Communities Act", which imposes harsher penalties, reduces alternative remedies, makes it harder to get parole or a pardon, and extends adult-sized sentences to youth offenders. What all these things do, as the studies have shown, is the exact opposite of making streets and communities safer. This approach reduces offenders to forever being the worst thing they have ever done. They have to wear it, like a scarlet letter, the rest of their lives.

Harper snubs his nose at science and empirical evidence and goes for the far more satisfying retribution and suffering approach. "An eye for an eye" is barbaric and Old Testament. This is 2014. We call ourselves civilized. And yet, there are sufficient among Harper's base of support who will be chuffed to think of all those "thugs" suffering, languishing, maybe even being abused during their long, long stay in prison, that this makes sense to the PM.

Should not the aim of a justice and corrections system be to improve people so they function well in society? All the indicators suggest that a humanist, supportive approach is the most effective and least costly way to do this. Our government's steadfast march in the opposite direction makes no objective, factually supportable or rational sense.

Posted by The Cailleach: Another Blogging Ginger at 13:47