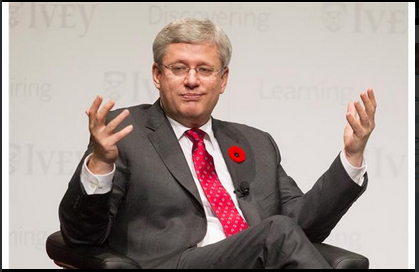 This past weekend I participated in a very interesting social media event. A hashtag on Twitter emerged, #HarpersRecord, inviting Canadians to recall just what our Prime Minister has done. With an election coming up this year, it seems only fair to take a good look at the record he seems so proud of.

The participation in this event was surprisingly large. Launched on Saturday afternoon, the hashtag trended in Canada several times Sunday morning. One thing was clear, a lot of Canadians are ANGRY.

Another interesting observation is that there was almost no "troll" activity. Does that mean CPC supporters didn't notice the thread? Does it mean that the documenting of Harper's record in government was such that they could not argue? Or does it mean that the PMO staff were off for the weekend so there was no one around to write up talking points and give the paid trolls their marching orders?

Participants added statements, photos, news links, opinions, and frustration. And the thing is, it's all documented. From closing libraries, to cheating in elections, to abandoning the long-form census, to removing protection from our waterways, to raising the OAS age to 67, to making it harder to get EI, to closing Veterans Affairs offices and returning over $1B to the treasury that was earmarked to be spent on veterans, to running a full-time propaganda machine, and more.... It is all on record. None of this is opinion. There is nothing that can be denied about Harper's record. The question is, will Canadians ignore this record and return Harper to power for another 4 years? Or will this collective rage finally get us up off our couches and out to the polling stations in unprecedented numbers to make sure these things never happen in Canada again?

If the link doesn't work for you, let me know in the comments section and I will try to do something different so everyone can see. 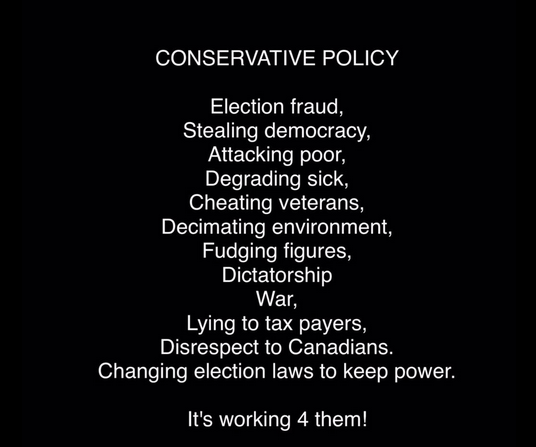 Posted by The Cailleach: Another Blogging Ginger at 08:38