This is an actual CPC fund-raising letter that has been floating around on the internet over the past few days. It is similar in many ways to most other CPC fundraising letters. 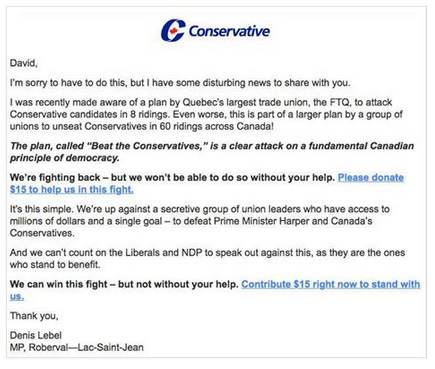 Now, let's have a good look at what they say.

I'm sorry to have to do this, but I have some disturbing news to share with you.

Here they are setting the stage. "Disturbing news" sets up a sense of anxiety, perhaps alarm. In psychology this is known as "priming". It's a technique designed to put the subject (the letter recipient) into a certain frame of mind which will enhance the impact of the subsequent information. The use of the phrase "to share with you" implies familiarity. It is intended to make the recipient feel like a part of something, an insider.

I was recently made aware of a plan by Quebec's largest trade union, the FTQ, to attack Conservative candidates in 8 ridings. Even worse, this is part of a larger plan by a group of unions to unseat Conservatives in 60 ridings across Canada!

"I was recently made aware of a plan" makes it sound like this is some sort of dark ops that CPC intelligence has uncovered. The use of the word "attack" makes it seem like something violent and unsavoury is about to occur. "Even worse" - this transfers negativity on the first part. People who receive CPC fund-raising letters frequently are already primed to respond to the word "union" with mistrust, outrage and condemnation. Unions are a central theme common to many CPC requests for money. Unions, media, special interest groups (like First Nations, environmentalists, veterans, women...) are among the favourite CPC bogeymen used to elicit funds.

The plan, called "Beat the Conservatives," is a clear attack on a fundamental Canadian principle of democracy.

"Beat the Conservatives" is a pretty lame slogan. I would have thought the unions could have come up with something catchier. Be that as it may, the rest of the sentence is twisted. "A clear attack on a fundamental Canadian principle of democracy" - so, if anyone challenges or campaigns against the CPC, they are being undemocratic. This is clearly a use of the word "democracy" with which we are unfamiliar. The suggestion is that not only is the CPC the bastion of Canadian principles, but anyone who opposed this "truth" is opposed to democracy. Take a moment to get your head around that.

We're fighting back - but we won't be able to do so without your help. Please donate $15 to help us in this fight.

And here is the ask. $15, they say, is essential to beat back this undemocratic evil conspiracy.

It's this simple. We're up against a secretive group of union leaders who have access to millions of dollars and a single goal - to defeat Prime Minister Harper and Canada's Conservatives.

They reference "a secretive group of union leaders" - it is really hard to argue that anyone in politics in Canada is more secretive than Stephen Harper and the CPC. This is amusing. This nefarious group "have access to millions of dollars and a single goal" - it's almost as though they were describing themselves! And what is this dreadful goal? "To defeat Prime Minister Harper and Canada's Conservatives" Gasp! How could anyone want that? Well, for many reasons. And, as we thus far live in a democracy (more and more questionable all the time, but let's make the assumption), it is the nature of a democracy for different groups with different ideas of how the country should be run, to compete against one another for the minds of the voters. Who will then, again theoretically, be allowed to cast ballots indicating their preferred representative in Ottawa.

We do not vote for the Prime Minister. They vote for the President in the US, but this is Canada and we just vote for a local representative who may, or may not, be a member of a party. The Prime Minister is only the leader of the party that won the most seats. First among equals, with equals being the most important part of that description. Stephen Harper is not a king by divine right, and opposing him is not treason, even if the spin doctors in the PMO would like to make it sound that way. Finally, Canada's Conservatives are not the Conservative Party of Canada, and vice versa. The CPC co-opted (or stole, if you prefer) the word Conservative to use in their name when Peter MacKay welched on a promise to David Orchard that he would not turn the Progressive Conservative Party over to Stephen Harper and his Reform/Alliance cronies.

They are nothing like the Conservatives of Diefenbaker. If your grandad voted conservative, wonderful. But you don't have a real conservative party to vote for. This lot has confused "conservative" with mean-spirited, uncaring, and riding roughshod over the environment, the people, and the institutions that many associate with Canada, all for the benefit of big business. Real conservatives know the value of a dollar and look to use money wisely, for the greatest benefit. The CPC like to spend a lot of money on advertising and ceremonies and photo-ops and flying their chums around the world... Things that do no tangible good, other than supporting their egos and increasing their control of the message and the minds of Canadians. This is not conservative. They cheat and lie. These are not conservative values. So it is actually insulting to real conservatives for the CPC to claim to represent them.

And we can't count on the Liberals and NDP to speak out against this, as they are the ones who stand to benefit.

Ummm. Yeah. Well, let's go back and think about the common usage of the term "democracy". The opposing parties are not going to side with the CPC against anyone trying to encourage a vote against them. That is just not how the game is played.

We can win this fight - but not without your help. Contribute $15 right now to stand with us.

Again with the bold. the underlining and changing the ink colour to heighten the sense of urgency and reinforce the $15 ask. "Stand with us" - they close as they began, encouraging the reader to feel a part of something, an ally.

The underlying premise of this, and most other CPC fund-raising letters, is not only to rake in piles more money, but to reinforce the notion in people's minds that the CPC is the rightful government and any suggestion that someone else should be elected is somehow seditious. I find it scary that some people read these things and actually just absorb this message and close their minds to other perspectives.

At least they are polite, if a bit presumptuous.  Canadians really need to think critically when confronted with fund-raising letters, public announcements, talking points, etc...

Don't let the CPC spin doctors bamboozle you with their mind-control tactics!
Posted by The Cailleach: Another Blogging Ginger at 14:37