Jason Kenney bet our money on Trump winning. No doubt he was shocked when whatever the GOP was doing to try to ensure a win didn't work. It was supposed to work, you see. Whatever it was. But it didn't, and here we are, with an angry Premier shouting at and blaming everyone else.

We are seeing a grown man who made a very bad calculation, having a very public meltdown. He invested in a risky deal and it fell through. Now he seems to think he is owed some sort of compensation. That really isn't how the world works.

Of course, all that money is a bit of a windfall to TCE. They are cutting their losses and getting out, laying off workers. And they are going out the door with our money. Why isn't Kenney asking for the oil company to give it back? Unless, of course...It was a gift, and the success of the pipeline was neither here nor there.

There have been a lot of gifts to oil and gas from this UCP government. They haven't resulted in the thousands of new jobs Kenney promised. But maybe that wasn't the point...

Promising jobs was maybe just to get elected, and to give cover for doling out billions to friends and donors. Kenney has doled out a lot of our money to friends & donors in the past two years, one of the most egregious being hiring Harper's 24 year old son for upwards of $100K. I mean, honestly, Ben Harper only got that plum job (part-time!) because he is the son of Kenney's good friend and mentor. There's a word for that... Ah, yes, nepotism. Creating a job for a friend's kid, and paying an outrageous salary, for...what, exactly?

But there are a ton of other examples. The War Room, the inquiry into "Un-Albertan" activities, the many panels and advisors who always say exactly what the UCP tells them to say, endorsing foreign-owned for-profit health care...

Kenney and his party seem to think that being in government is a license to reward supporters, curry favour with corporations (many of them foreign, like Australian coal companies), and engage in the worst sort of cronyism, while completely ignoring the needs of regular Albertans

If this bothers you (and it should) please take a moment to write to your MLA, and cc the NDP and the media, because goodness knows, your correspondence is probably going straight into the trash at your MLA's office.

The UCP are not above the law. Jason Kenney is not a king. They are supposed to work for us. They don't appear to be doing that. They appear to be working for themselves and their friends. We need to let them know, in no uncertain terms, that this is unacceptable.

Posted by The Cailleach: Another Blogging Ginger at 13:17 No comments:

The "Liberty Coalition" and why Canadians should be aware of it

Isn't it extraordinary? Some conservative Canadian politicians from across Canada have decided that the best response to a global pandemic is to join a group called the Liberty Coalition Canada.

I decided to have a closer look at this "Liberty Coalition". We should be aware of who is organizing and trying to draw supporters across Canada, and what they are setting out to do.My observations follow...#cdnpoli #abpoli #onpoli
The "Liberty Coalition" seems to embrace several causes, or "initiatives" as they call them. There's the "End the Lockdowns Caucus", "Save our Youth", "Open Small Businesses", and "The Church Must Gather".
The Liberty Coalition appears to have begun as a campaign to keep Ontario churches open through the pandemic, and has grown into a science-denying fundraising effort for the far right.
Members of this Liberty Coalition include Maxime Bernier, Derek Sloan, and Randy Hillier. Their web site features a "Resources" page which offers up articles from Rebel Alliance Media, GraceLife Church, Disrn, Western Standard, and Rex Murphy.
The End the Lockdowns caucus opposes closures to prevent the spread of COVID, saying that restrictions violate citizens' democratic freedoms. 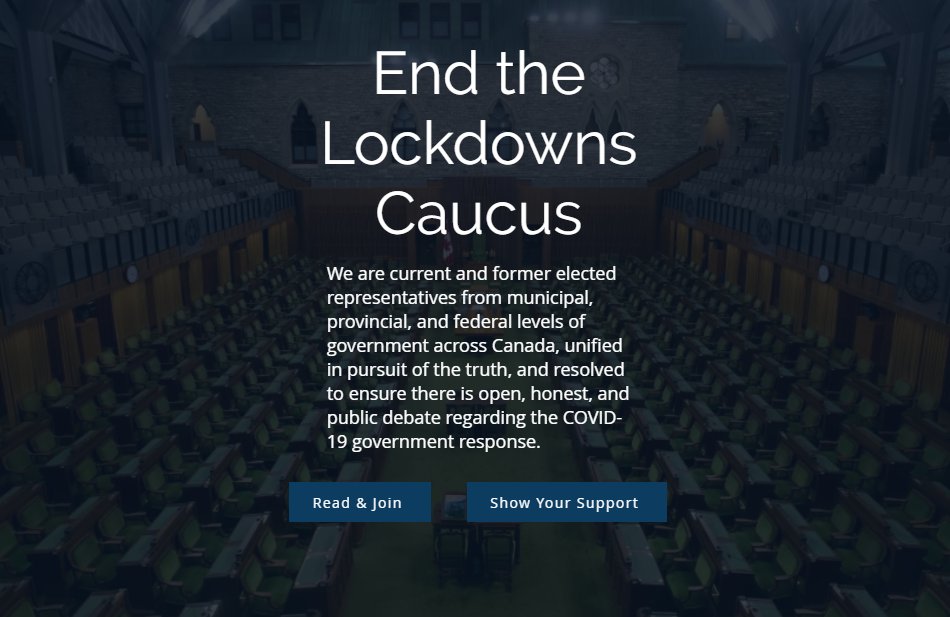 The End the Lockdowns caucus boasts a long list of current and former conservative politicians, from MPs down to municipal councillors. Most are from Ontario and Alberta, but there are a few from Quebec, Saskatchewan, BC, and one from New Brunswick.
The "Save our Youth" initiative engages potential supporters emotionally. "Spearheaded by mothers", this initiative uses short videos intended to elicit visceral responses. Anecdotal "evidence" is a favourite tactic of the right. 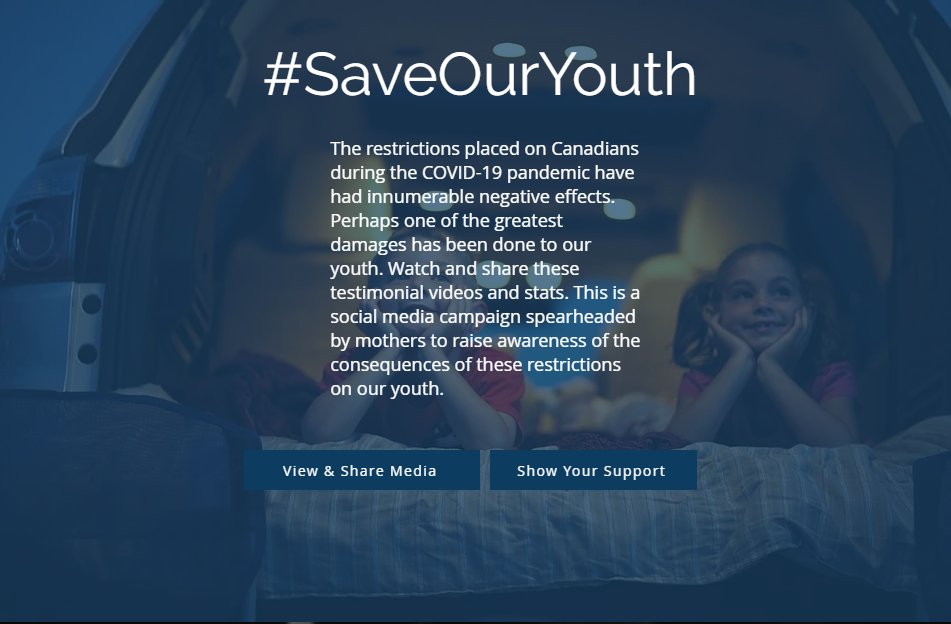 "Save our Youth" emphasizes how harmful missing church is for young children. They provide loads of memes for the like-minded to share on social media. 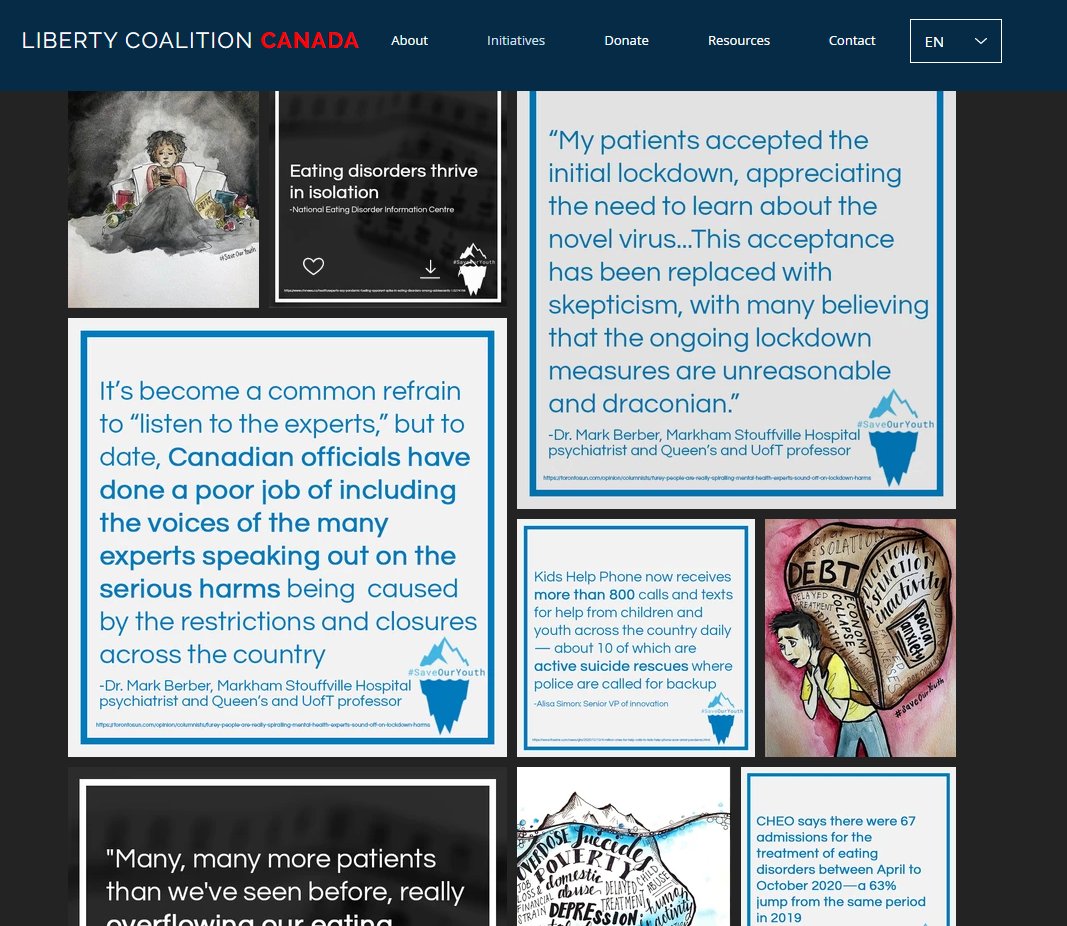 The "Open Small Businesses" initiative is supported by the Canadian Federation of Small Businesses, a group of small business owners calling themselves "We Are All Essential", a Rebel Media-led campaign called "I Will Open", and Restaurants Canada. 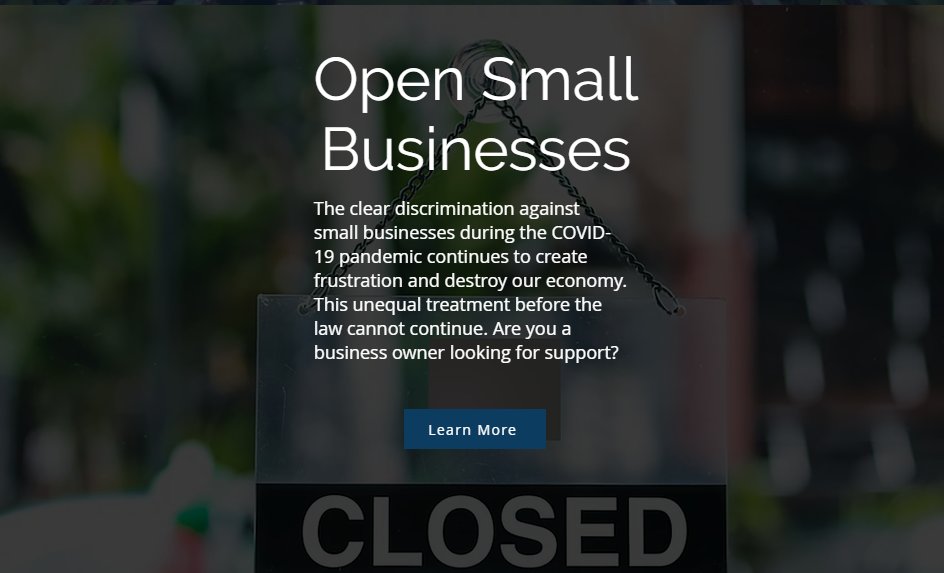 This initiative also provides a lot of memes for use by supporters on social media. 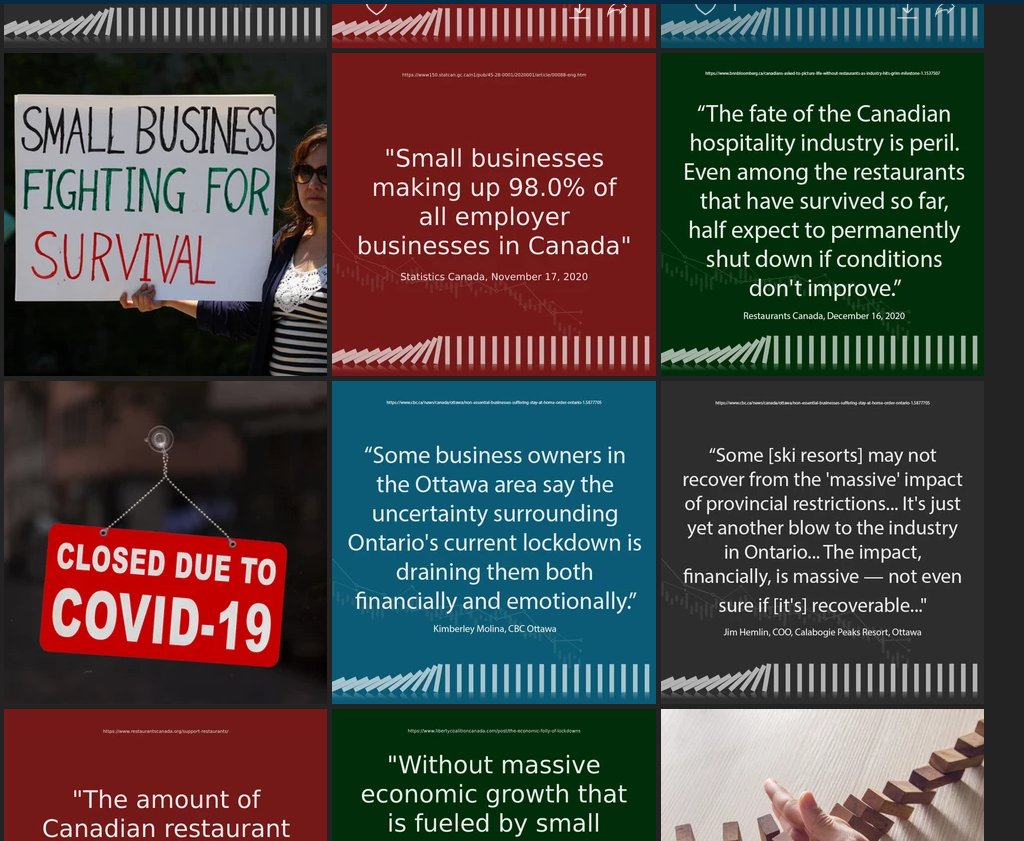 "The Church Must Gather" is the fourth initiative of this group. 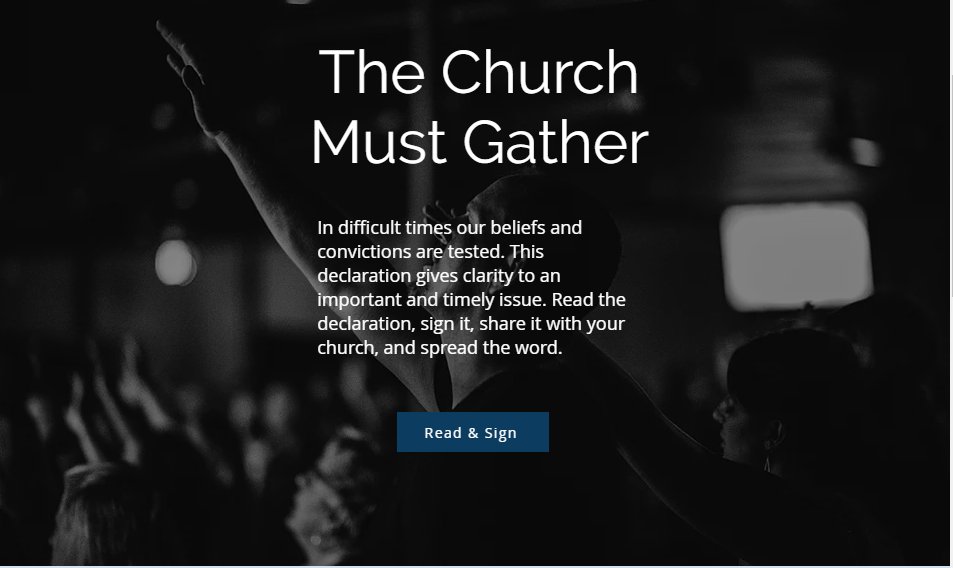 This initiative encourages Christians to defy local authorities and congregate for worship services.

The Church Must Gather is collecting names on a petition. They use a string of Bible verses to supposedly justify breaking public health restrictions for church services.
And, of course, they are fund-raising. They encourage donations to help stop all these terrible things they say shut-downs to keep people safe are causing. 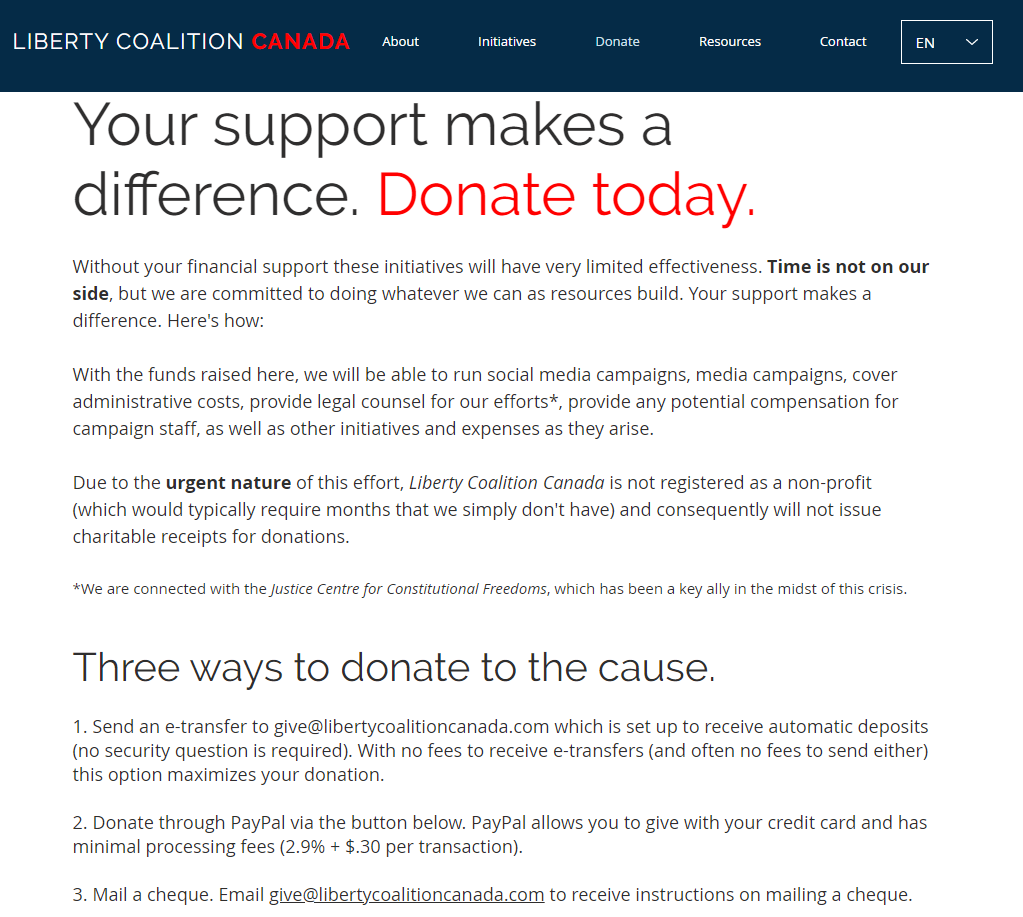 The website is very professional, suggesting that this group has resources. There is nothing "grass roots" about this. I am inclined to suspect the hand of someone like Jeff Ballingall behind the slickness of the campaign.
They work on making a case for ignoring COVID-19 so that businesses and churches can continue to do their thing. Apparently, they are not concerned about the illness and death that lifting restrictions could cause.
I will note, also, that "Liberty Coalition" sounds pretty American, and pretty Republican at that. The group seems to be dismissive of public health concerns, while trying to make the case that public mental health is being adversely affected by lockdowns.
I have heard a lot of politicians on the right pointing to sharp increases in suicides as a reason to stop restrictions. This is not borne out by the facts. 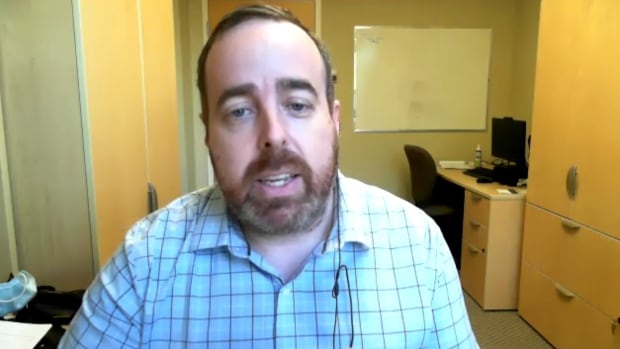 Many assumed suicides would spike in 2020. So far, the data tells a different story | CBC NewsWidespread assumptions that suicide rates would increase during the pandemic are not supported by the growing amount of evidence coming out of Canadian provinces and other jurisdictions around the wor…https://www.cbc.ca/news/canada/calgary/suicides-alberta-bc-saskatchewan-canada-2020-no-increase-1.5902908
This Liberty Coalition also points to mental health issues and suicide as reasons to end restrictions. But, just like their emotionally cloying anecdotes, they are not basing their claims on factual evidence.
This is not a new tactic for the right. Albertans may recall Jason Kenney's folksy story about his dear friend who committed suicide "because of the economy". Turns out the guy was under investigation for a 30-year string of violent sexual assaults. Don't take them at their word.
In conclusion, it appears to me that this group is using emotional triggers to appeal to the public to get what they want. What they want has absolutely nothing to do with the public good. They want to ensure the cash continues flowing into their businesses and churches. Period.
Posted by The Cailleach: Another Blogging Ginger at 13:12 No comments: