Pissing Off Alberta's Doctors Was a Big Mistake, Mr. Kenney

There is trouble brewing in Alberta...

Let's begin with a basic primer on how health care works in Canada versus how it works in the US. In Canada, people find a family primary care doctor who they see for check-ups and if they have health issues. This primary care doctor may refer their patients to specialists or send them for tests. But all the doctors are employed by whatever province they practice medicine in. The provinces administer health care. They set the rates at which doctors can bill for their services.

In the US everyone pays for their own health care. Many people have insurance through work, where their employer pays all or a portion of their insurance. Still, many Americans do not have health insurance and are, therefore, unlikely to visit a doctor because they can't afford it.

Even those who do have health insurance often face a battle when trying to claim for health care. This may involve the patient paying lawyers when their insurance company denies coverage.

Insurance companies are in the business of making money. They like to receive premiums. They don't like to have to pay out. They will fight paying out. They will write extensive fine print to avoid paying out because of things like pre-existing conditions, or taking unnecessary risks. It sucks.

In my opinion, for whatever that is worth, the Canada Health Act should also cover necessary pharmaceuticals, eye care, dental care and mental health care. But that is just my opinion.

Now, Conservatives have been trying to end Canadian universal health care for a long time... They find the notion of universal healthcare horribly "socialist". By the way, the Canada Heath Act was created in 1964 by Lester Pearson's Liberal government, but not without considerable pressure, cajoling, and dinner meetings with the CCF/NDP led by Tommy Douglas.

Because back then, parties could get past partisan lines to do what was in the interest of the public.

But Conservatives have always been opposed. And never more so than now.

The new crop of conservative politicians raised up by Harper are particularly opposed to universal health care.

Here is a bit of history:

The CPC is predicated on a commitment to eliminate Canadian Universal Healthcare. Since Jason Kenney is one of Harper's acolytes, so is the UCP.
Therefore, it is no surprise that the UCP in Alberta is doing just that. Attacks on the livelihoods of nurses, tearing up the contract with Alberta doctors, effectively cutting funding for health care. Yes, yes, they kept the budget the same. But if you have an increase in population, and increasing costs due to inflation, the budget remaining constant is actually a cut.
Doctors have been struggling with finding ways to continue to treat their patients while they or their patients are self-isolating. The Alberta government re-instated a protocol from H1N1 which allows doctors to have virtual appointments with their patients.

The Health Minister, Tyler Shandro, tweeted that they were activated this billing code.

And doctors went looking for more information. They found the new bulletin: 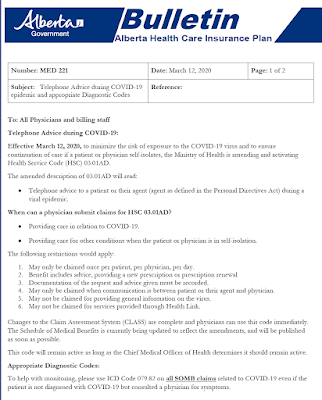 The trouble is, there is no rate attached to the billing code on this bulletin and doctors were very confused and concerned about this.

Then the doctors found out that billing code 03.01AD was the same amount as it was for H1N1, $20 per call. All the other provinces have updated their epidemic virtual care rates. But not Alberta. The doctors are outraged. 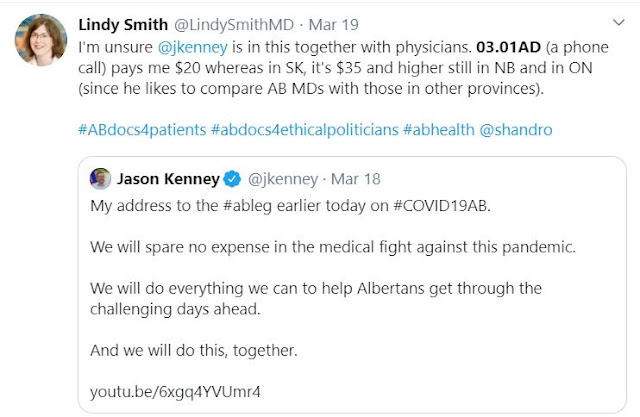 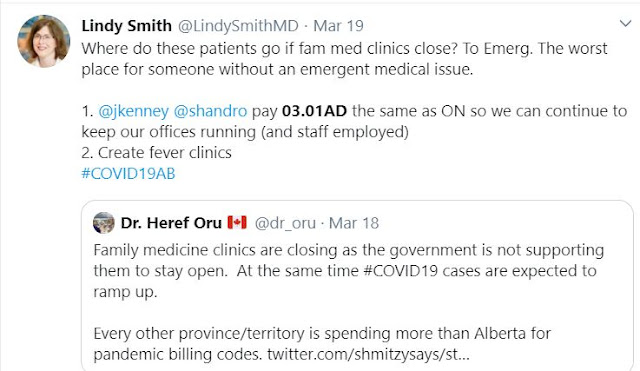 With the COVID-19 pandemic spreading rapidly, the UCP announced a measure which they said will keep people out of doctor's waiting rooms while accessing health care. They have contracted with Telus to offer an app whereby people could talk to a doctor remotely.  They did not discuss this with doctors. 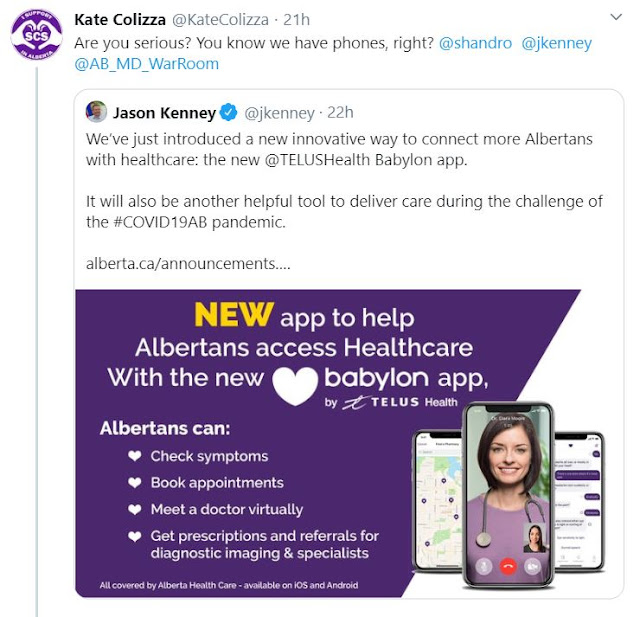 At first glance, this may seem like a sensible idea. Except, you don't get to talk to YOUR doctor. You get to talk to a random doctor. Possibly not even located in Alberta. This might be fine for dealing with simple issues, but if you have complex health issues it would obviously be better to deal consistently with one doctor who knows your history.

The thing is, doctors already can contact their patients on the phone. They can bill for this, but at a much lower rate (less than half) than an in-office appointment.

Patients who may rely on having a physician who understands their complex concerns will not be able to access that doctor unless they go into the clinic, potentially putting themselves at risk of infection. Doctors will lose visit revenue.

You may be thinking that doctors make a lot of money, so why should I care if they lose a bit of revenue to this Telus system? Think of it this way: doctors are small business owners. They pay rent, and utilities, and they pay for staff to manage records and make appointments. So their take-home pay is significantly less than what they bill.

Recall that the UCP wants to reduce doctors' billing rates. At the same time, they are skimming off patients to this Telus system. Like any small business, if there is not enough revenue to keep the lights on and pay staff, they will close their clinics and go elsewhere. We are already short of doctors in this province and the UCP seem determined to drive more of them away. 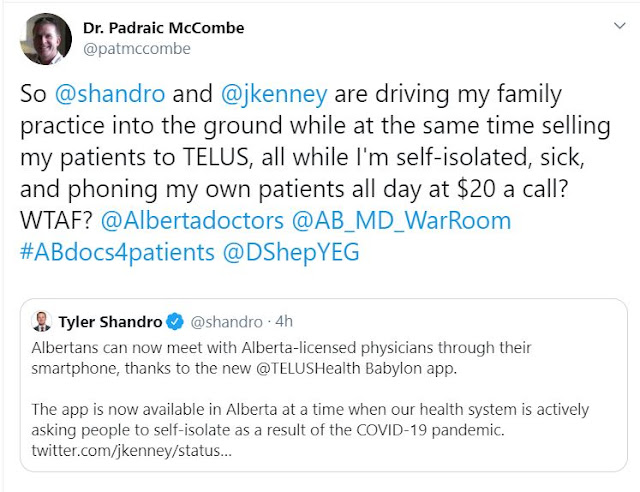 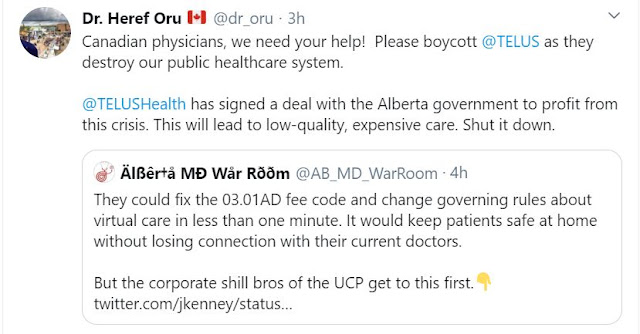 Doctors are understandably extremely unhappy about this. There is a pandemic and doctors are needed. Based on the examples of Italy and South Korea, doctors are going to be run off their feet looking after very ill people. This is not the time to be driving them away.

Or, so one might think. But recall, the UCP, like the CPC, is predicated on eliminating universal public health care. But they went after doctors, who are highly educated with quite decent research skills. And so this came to light:

Even the appearance of conflict of interest should be something the government takes seriously. However, it appears that they do not. 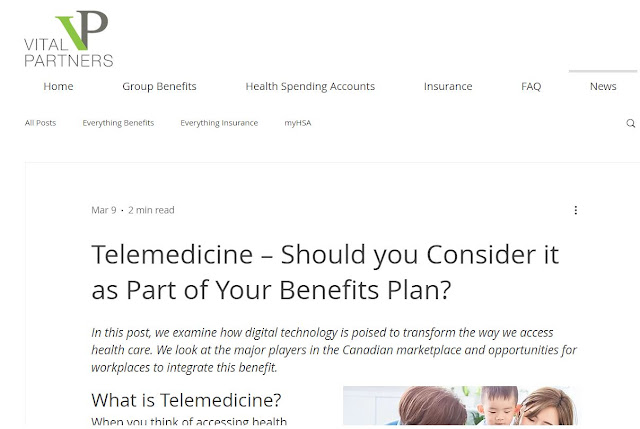 Matt Wolf, Jason Kenney's "Issues Manager" went on the offensive, attacking those who would criticise what appears to be a very blatant conflict of interest... 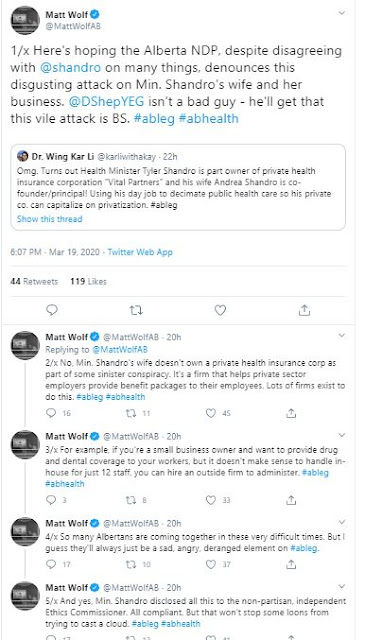 This key strategy of the UCP, to silence dissenting voices online, may not work this time. Doctors are furious. And they are not likely to let this go. More bits and pieces keep coming to light... 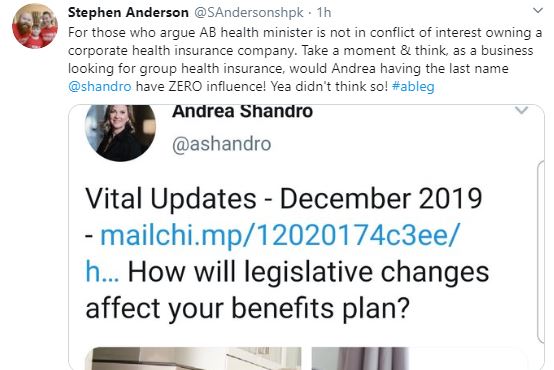 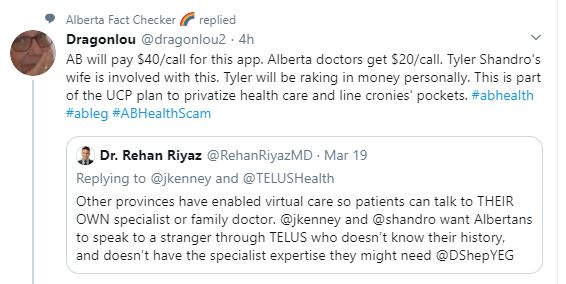 Stay tuned. As the COVID-19 Pandemic ramps up in Canada, Alberta's doctors are having to fight on 2 fronts at once.  I strongly suspect that Albertans, like most Canadians, are passionate about their health care. This will not go well for the UCP's reputation.


Posted by The Cailleach: Another Blogging Ginger at 13:57 No comments:

Jean Cretien was a Prime Minister of Canada. Something you will never be. Do you know why? I bet you don't. It's because the majority of Canadians are smart enough to see through the hate and fear-mongering from the likes of you. Most Canadians are progressive thinkers.
Most Canadians feel no animousity towards their fellow humans over sexual orientation, skin colour, religion, economic status... Most Canadians, in fact, actually care about people we have never even met.
We are happy to pay taxes if it means a kid on the other side of the country gets life-saving treatment their family couldn't afford without our universal health care. We are outraged when people are discriminated against because of race, creed, colour, gender, orientation.
We care. We want the most vulnerable in our society to succeed. We want to help make that happen. We want to make true reconciliation happen. We want to move away from fossil fuels so we can protect the environment.
We want everyone's children to be fed and cared for and to receive an excellent secular education. We believe in science, compassion, empathy, and sharing. Our "family values" don't involve building walls, they are about making bigger tables.
We believe in a woman's right to self-determination about her own body. We believe in everyone's right to choose how they die when confronted with intolerable circumstances.
We want evolution taught in schools, and we think kids should go to schools where they can interact with children from different backgrounds so they can learn how to understand and accept and embrace diversity, because that is how the world is.
Most Canadians realise that immigrants are entrepreneurs and major job creators. The bogey-man you and Harper and the CPC tried to create out of people fleeing for their lives doesn't have any traction with us. We see through you.
"Barbaric cultural practices"? Please. Disproportionately carding black youth is a barbaric cultural practice. Writing anti-semetic slogans on synagogues and spitting on women in hijabs are barbaric cultural practices. But they are not mainstream Canadian practices.
Your party, the CPC, wants to change Canada by making everything straighter and whiter and meaner. And you call yourselves Christians as though that was some sort of password to obscure what your goals are.
You want "law and order" and stiffer sentencing, more punishment, calling it making communities safer. But all the research shows that does not make communities safer. Addressing underlying issues makes communities safer.
Locking people up for longer and in worse conditions makes communities less safe. It creates a criminal underclass. It dehumanizes people, makes them dangerous. The US model is the very last model anyone should be looking to emulate.
And that is in everything: education, health care, justice, election rules, environmental policy, international relations... Everything. And yet, your party, the CPC, seems to want to drag Canada into being a USA mini-me. We don't want it.
You aren't really a westerner. You aren't really an insurance agent. You aren't really (based on the weird way the leadership vote was handled) the leader of the CPC. You aren't even 100% Canadian. And your party does not understand how Canadians feel. Not at all.
How dare you claim to speak for any but the minority base that supports your party? Shouldn't you be out house-hunting? It takes time to find the right place, you know. Especially when you have to find somewhere with so many bedrooms.
Posted by The Cailleach: Another Blogging Ginger at 15:40 No comments: